May the Force be with [DarK_RaideR] 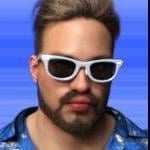