The Hard Reset or the Return of Ruby-Wan 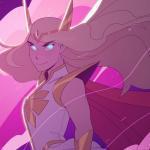